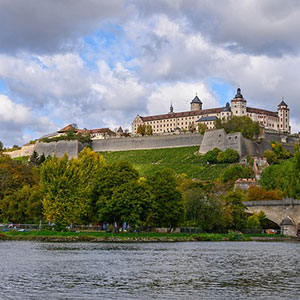 Experience Central Europe’s history with highlights of Jewish heritage on the Rhine, Moselle, Main, and Danube Rivers. From Nuremberg to Budapest, a history expert accompanies you to share fascinating historical lectures to spotlight Jewish history in select destinations. Before your cruise, spend two nights each in London and Paris. Sightseeing in London includes Big Ben, Westminster Abbey, Buckingham Palace, and St. Paul’s Cathedral. Travel from London to Paris via Eurostar high-speed train, and enjoy guided sightseeing, including the Latin Quarter, Les Invalides, Place de la Concorde, Eiffel Tower, the Arc de Triomphe, and a Seine River cruise. Your expert Local Host® is on hand to assist you throughout your stays in London and Paris. Take a high-speed train from Paris to Luxembourg City to board your Avalon Suite Ship® in Remich. Sail on the beautiful Moselle River, stopping in Trier, Germany, believed to be even older than Rome and many remnants remain, such as imperial baths. The wine village of Bernkastel will fascinate you with its narrow streets and half-timbered houses still standing from the Middle Ages. Continue your European river cruise through the dramatic Rhine Gorge, considered the most beautiful stretch of the Rhine River. See the rock of the Lorelei and ancient castles standing majestically on cliffs 400 feet above the water. Visit the magnificent Bishop’s Residenz in Würzburg and marvel at medieval Bamberg, a UNESCO World Heritage Site. In Roth, select a guided tour of the Bavarian town or take an excursion to Nuremberg for a guided tour or a visit to the notorious rally grounds of the Third Reich. Join in a guided visit of historic Nuremberg and an excursion to Bavaria’s capital, Munich. Along the Danube River is Regensburg, Germany, one of Europe’s best-preserved medieval cities. Follow the traces of the oldest Jewish community in Southern Germany and visit the Document Neupfarrplatz museum. Be sure to taste some of Germany’s famous beers! Visit Passau with its narrow, winding cobble-stone streets, and Melk’s magnificent 11th-century Benedictine Abbey, before arriving in Vienna, the “City of Music” that inspired the genius of Beethoven, Mozart, and Strauss. On a guided tour, discover Vienna’s Jewish history, which spans more than 800 years. Arrive in Budapest to see the famous sights with a local expert. Take a fascinating Jewish Heritage tour in the city with the most populous and active Jewish community in central Europe.

Founded in 902, Bamberg remains a medieval-looking city known for its symphony orchestra and specialty “smoke” beer. Bamberg was also the first site in Germany of lithographic printing featuring movable type.

The city’s winding streets are filled with baroque patrician houses as well as the breathtaking 11th century cathedral of Holy Roman Emperor Heinrich II, which houses his tomb as well as that of Pope Clement II. Tour the 16th century Alt Residenz (Old Residence) and the 17th century Neue Residenz (New Residence), both of which were bishop’s houses.

Restless, enduring and wonderful, London is Europe’s largest city. And surely, if you have the choice to visit only two or three cities of the world in your lifetime, by all means make one of them London.

The Romans started it all. The city they developed was “the square mile,” – and Londoners still hunt for Roman relics in the Thames. History is everywhere you look in London, yet today the city is as modern and metropolitan as any city on earth.

By day, London is buzzing with the frenetic pace of commerce not even Dickens could have imagined. By night, the excitement and glitter of theatres, cinemas, pubs and restaurants beckons throngs of travellers from around the world. But there is another London, a peaceful London of cool museums, quiet tea rooms, immaculate gardens and hushed churches.

There is Royal London – ancient pageantry in a modern kingdom – with its palaces, pomp and precise manoeuvres at the Changing of the Guard. And there’s outrageous London, the urban gathering ground for Cockney pitchmen, “fringe” theatre and the city’s youth, with their own distinctive style.

There is also Greenwich, easily accessed from central London by public transport, or take a more scenic route and arrive by riverboat. Notable for both its maritime history and royal heritage, it is perhaps best known for giving its name to the Greenwich Meridian (0° longitude) and Greenwich Mean Time, based at the Royal Observatory.

London, this extraordinary city of contrasts, holds a stunning abundance of hidden-round-the-corner surprises. You owe it to yourself to explore them all. Here, then, is the London you’ll come to know and remember.

Along its banks, you will often find picturesque Bavarian villages that would delight any photographer’s eye.

As the French capital, Paris is the commercial, financial, and industrial focus of France, a major transportation hub, and a cultural and intellectual center of international renown. A beautiful city in which tourism is the main industry, Paris is cut by the Seine River. On its stately, formal right (northern) bank are many of the most fashionable streets and shops, and such landmarks as the Arc de Triomphe, Place de la Concorde, Louvre, and Sacré Coeur.

The left bank houses governmental offices and is the site of much of the city’s intellectual life. It is known for its old Latin Quarter and for such landmarks as the Sorbonne, the Luxembourg Palace, the Panthéon, and the modern Pompidou Center (see Beaubourg). The historic core of Paris is the Île de la Cité, a small island occupied in part by the Palais de Justice and the Cathedral of Notre-Dame de Paris. Above the city rises the Eiffel Tower. Paris is divided into 20 arrondissements (boroughs) and governed by a mayor.

A fishing village when it was conquered (52 B.C.) by Caesar, it became an important Roman town. It was a Merovingian capital in the 5th cent. and became the national capital with the accession (987) of Hugh Capet, count of Paris. It flowered as the center of medieval commerce and scholasticism but suffered severely during the Hundred Years War. Paris consistently displayed a rebellious and independent spirit, as in its resistance to Henry IV (1589-93); the first Fronde (1648-49); the revolutions of 1789, 1830, and 1848; and the Commune of Paris (1871). During World War II it was occupied (1940-44) by the Germans but was relatively undamaged.

Human settlements have existed here at the confluence of the Danube, Inn and Ilz rivers ever since prehistoric times. In this millennium the city was considerably enlarged by the prince bishops of Passau, who made it their royal residence and capital of the largest Danube diocese. The wonderful Baroque buildings that dominate the city today were built after the great fire of 1662. One of the most striking is cathedral of St. Stephan, which boasts the world’s biggest church organ. One of the best ways to enjoy the magic of Passau is with a sightseeing tour by ship.

A perfect combination: an inviting skyline, impressive historic monuments, and legendary hospitality. Regensburg, Germany’s best preserved large medieval city, offers a harmonious scenario in every respect. Here, the heritage of major past eras is the spice in the soup of lively urban life.

Get a feeling for life in the days of old – by walking over the Stone Bridge, built over 850 years ago and the oldest of its kind in Germany. Or stroll through the Old Town lanes with their tall patricians’ towers; pass through the Roman Porta Praetoria at the Northern perimeter; and visit the Old Town Hall with historic imperial hall and the palace of the princes of Thurn & Taxis. Or take the time to listen to an uplifting choir concert in St. Peter’s Cathedral – Bavaria’s most outstanding Gothic structure.

Ride the boat across the Danube rapids, enjoy some of the many festivals, experience art and culture at historic sites, and treat yourself to Regensburg fried sausage at the historic Salzstadel.

Intersecting trade routes, a favorable climate, fertile soil and a primary waterway brought wealth to Würzburg from the early Middle Ages. Symbols of this wealth-and the artistry it bought-are what still attract visitors: the massive, medieval Fortress Marienberg that towers over the city; the Residenz, arguably the most ornate Baroque palace in Germany; St. Kilian’s Cathedral, with its Romanesque exterior and splendidly Rococo interior; and Neumünster Church.

Those who make the trip to Würzburg are generally surprised by its warmth, charm and extensive variety of art, architecture and culture. Würzburg’s prime location on the Main makes for delightful strolls along the promenade, and riverfront cafes overflow in good weather. Sightseeing boats offer sightseeing excursions and trips to neighboring villages, and passenger ships plying the Rhine, Main and Danube make the city a prime stop.

Würzburg lies in the heart of Franconian Wine Region, and wine and wine-making are central to life in Würzburg. In autumn, the hills surrounding Würzburg and throughout Franconia are dotted with grape pickers, who fill baskets and dump them into waiting trailers.

Prices are per person, land or cruise only, based on double occupancy. Offer subject to availability and change without notice. Some restrictions may apply. Please ask us for details.

Charges not included in the land vacation price: airfare to and from the start of your vacation; airline baggage fees including checked and/or excess baggage fees; Federal inspection fees for the Federal U.S. Customs and Immigrations; agricultural tax; other per person taxes imposed by government entities; applicable cruise taxes, fees, fares and port charges; passports; visas and vaccinations; transfers; tips to your Tour or Cruise Director, Local Host, driver, Local Guides, and/or ships’ crew; gratuities on ferries, trains, and cruise ships; laundry; telephone; minibar; alcohol, beverages, and food outside of the contracted menu as presented at a hotel or restaurant (these extra items will be billed to you before leaving the hotel, ship, or restaurant); additional excursions and activities not listed as ‘included’ in the itinerary; porterage at airports or train stations; Travel Protection premiums; and all other items of a personal nature.

Click on the buttons below to request a quote on this deal or contact us directly with further questions or comments.

Request A Quote Send To A Friend Have A Question? Contact Us